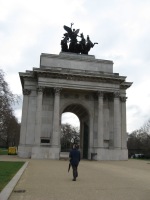 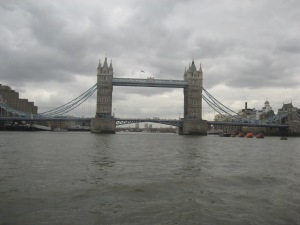 Up bright and early and after a very nice continental breakfast compliments of the hotel we headed for Earl’s Court underground station.

Purchased ticket without fuss and even managed to find right train to Piccadilly Circus to collect our London Passes for Tuesday and Wednesday. 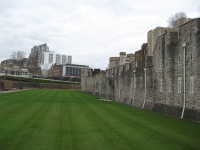 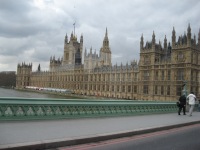 Very straight forward with London Passes and travel cards in hand we headed for a coffee shop to plan the rest of the day.

Great coffee we all resisted the yummy donuts and baguettes (still not hungry after breakfast).

We boarded our First Hop on and Hop Off tour. This is a must in London as you can really get your bearings quickly. When one of the tours stopped at the Westminster stop we alighted and hopped on a ferry that cruised from Westminster to Woolwich and back again.

This was part of our pre-booked Hop on Hop off day pass. It fantastic an
d the Captain giving the commentary was comedian but his commentary was laced with very interesting facts and figures. Arrived back at Westminster mid afternoon and reconnected with bus tours spend the next couple of hours touring around all the main sights. 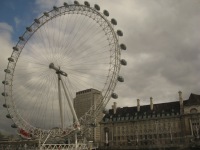 Had dinner in back in the

Piccadilly Circus area (Sharpie spotted a place to eat earlier in the day and mentioned it at least 30 times during the day) Must admit it great food and since we hadn’t eaten since breakfast it hit the spot.

After finishing our 4.30pm early bird special (Seinfeld reference) we caught another Hop on Hop bus back to within half km of hotel of course staying the buses until next stop would have set us down 50 yards from hotel but we needed the walk.

All in all a full day and not too tiring we saw so much.

4 thoughts on “London – Our first look around”

Planning 2022 TravelJanuary 1, 2020
Taking 2020 off from OS travel, may sneak in a few domestic trips. Well that didn't quite go to plan now looks like travel break is for another year - all OS trips have been postponed until 2022.