London – Getting to know you!!

First to breakfast again this morning, early to bed early to rise. It is good to have place to ourselves to savour the breakfast and the peace of the morning before setting out.

Today the plan was to finish of our hop on hop off tours, then on to St Pauls Cathedral and the Tower of London.

The Hop on Hop off bus we caught near our hotel took us down past Harrods on through Piccadilly Circus (again very familiar with this area now) and up to the British museum and the Russell Hotel (expected the Adams family to appear at any moment). 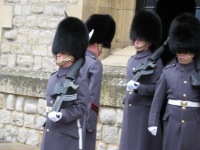 As we passed Marble Arch the Queen’s Guards came riding through on their way to the Palace. We were stuck in traffic on the bus but in a perfect vantage point. It must have been 3 degrees outside but most of the horses were clipped.

Changed to yellow Hop on Hop off bus and continued through the Westminster area and crossed the river before heading back across adjacent to Houses of Parliament then on up through Fleet St to St Pauls. Wow how impressive is the dome …no pictures allowed but this didn’t stop some people. Mostly Americans maybe no photos stand for something else in USA. Visiting the ladies room in the crypt seems a bit unusual but when you get the chance ‘you go’.

Boarded our first double decker bus (No 15) which transported us to the Tower of London. Tower of London was interesting there is only so much you can say about very very old stone.

I enjoyed watching the video on the Queens coronation mum said she was at boarding school in Armidale when this actually took place. We boarded the underground to return to Earls Court station (nearest our hotel) Arriving back in time for early dinner at an Italian restaurant. What can I say the food was sensational!!!!!

We are only eating morning and night no need for more than a coffee during the day. Another early night even by my standards.

One thought on “London – Getting to know you!!”