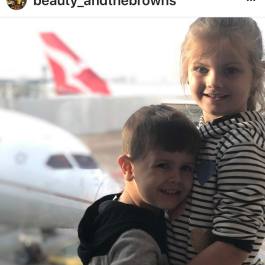 Sarah and Dan got a great deal on visiting Disneyland in both Shanghai and Tokyo and grandma got to tag along – she never needs to be asked twice. These are the kind of experiences I like to fill my life with I would rather create a memory then buy things any day of the week. The less you buy the more you can spend on making memories.

Flight Qantas 129 A330-300  – Departed a few minutes late at 9:35am Great seat in row 57KJ DEF 2 3 2 configuration at the back of plane allows room to stand in the aisle while someone passes. Food was good chicken for lunch and beef and rice for dinner were my choices Kids were amazing never complained or asked once ‘how long now’? Emily and Daniel had several hours sleep and Ollie (so many movies too watch lol) got at least 2-hour nap during the flight.

We landed just after 6:30 pm. Shanghai is two hours behind Australia so no jet lag. Customs was a very simple and easy process and given the number of people in the queue we were through very quickly. We are confident now that we could have entered through the 144-hour visa waiver line. We had obtained a visa in Sydney just to be on the safe side. We didn’t want to put Japan part of the trip at risk if we were turned back. After finding bags lapping around carousel 10 we spilled out into the throng people in arrivals. Our transfer driver spotted us quickly. The Donald Duck and made Mickey Mouse luggage might have been a give away or that we only fair people in the place. After a very comfortable 30 minute ride our hotel stood before us and was a welcome sight even though only 8pm were all ready for bed.

The hotel is amazing Toy Story theme from top to bottom including woody appearing in the lobby from time to time. Not sure how many rooms all built on figure eight design which makes getting around easy. The grounds were so peaceful and a great place for an early morning walk 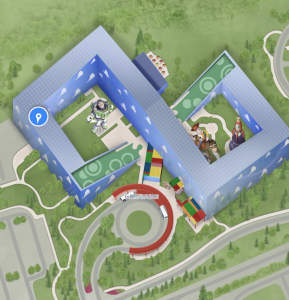 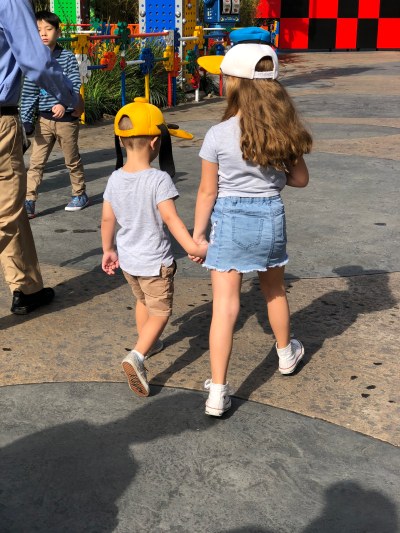 Pirates ride was the next Emi didn’t like this much but Oliver loved it. Kept saying go again. The graphics were so real it felt like you right in the battle and on the galley rising up through the sea. We waited to meet Jack Sparrow and just got there right at the right time to beat the line. Jack spent ages talking to Ollie and Emi. Oliver just thought he was the best, everything was about Jack said this Jack said that for a long while afterward. After some bbq corn and yummy chicken sticks, it was time for the Fantasia show in front of the castle. The props and costumes were amazing and so well done. The kids were totally meresmised. 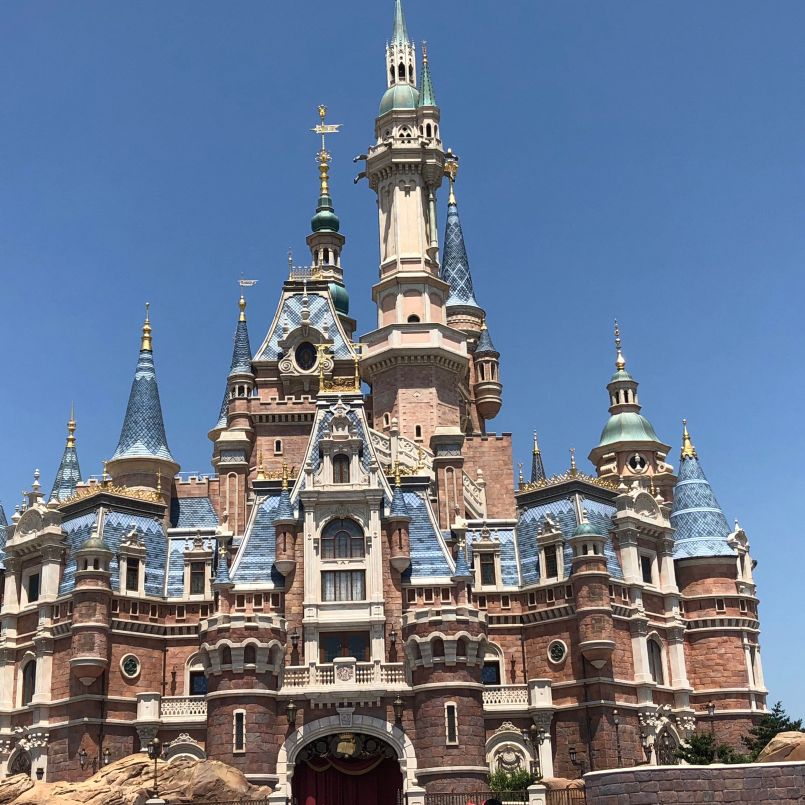 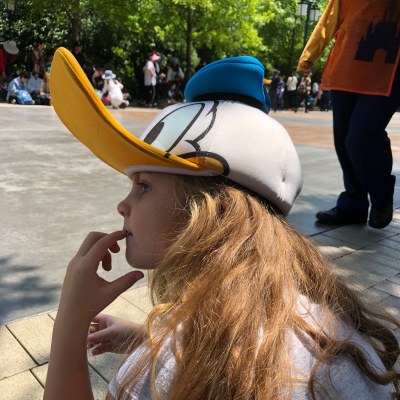 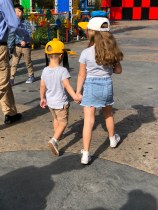 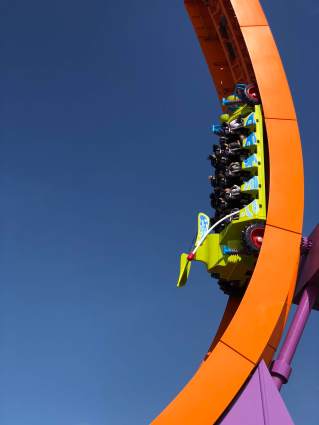 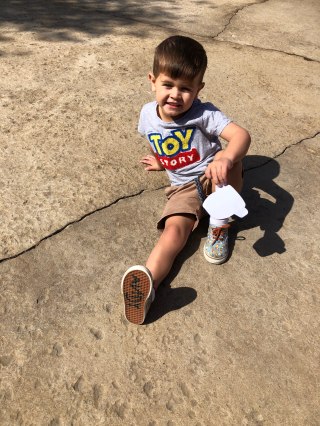 Next, it was time for the parade we settled down in a spot to wait. Sarah and dan ducked off to do the seven dwarf ride. The parade was fun and the character loved Ollie and Emi in their hats. Everyone in the park loved them. The characters to cast members and the people who were always wanting to take their photos. After the parade found the hotdog stand and they were quite tasty buns a little hard, not soft like ours but filled a spot. Next, it was time for Ollie to hold court with all the Marvel characters especially Captain America. Kids love all the characters and love meeting them over and over. In meantime, Pluto and Goofy came walking out to do their stint. The waiting line was closed before we were finished with the ducks. So Ollie waited in the middle of Main Street and sure enough, when they were leaving Pluto spotted him took his hand and Emi with goofy to walked all the way back to the exit. It made Ollie’s day perfect and it was only 3pm with dinner at Cinderella’s table and fireworks to come. 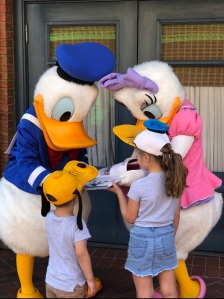 We headed back to Main Street to meet Donald and Daisy together.     Before dinner, we decided to take the boat ride and the kids were delighted when the cast member loading the boats organised with our boat captain to let them steer – it didn’t seem to be something they were doing for others so kids felt a bit special – 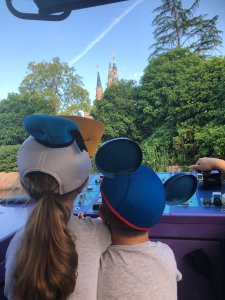 No doubt their hats which caused a stir all over the park helped them secure this opportunity. They did a good job and we made it around safely.         Dinner in the castle was really good and the food was delicious the character spent ages with the kids and although tired the kids were still loving their Shanghai Disney day with another day to come.

No rocking to sleep needed at night for anyone.

Up and at ‘em early again to take advantage of early park access which is a part of being in the Disney hotel. Enter through. Special entrance before the park opens. Our second day was a bit of a blur for me but I know there were more character visits and slowly the book was filled with character signature on their page. 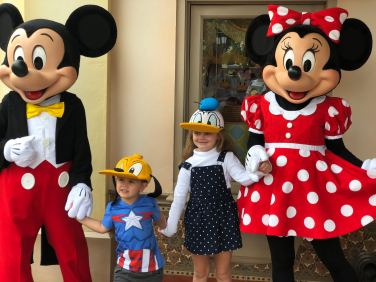 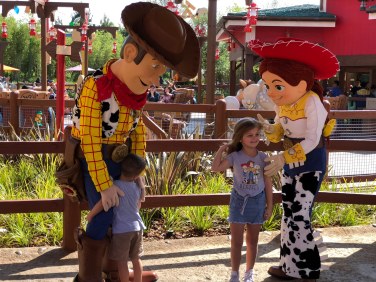 Sarah had purchased a Disneyland storybook (A- Z of characters I think) and kids were getting each character to sign their page. Emily patiently waits for a long time to meet with Snow White and she was made feel very special. 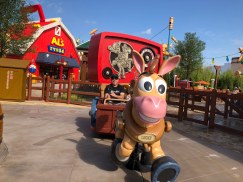 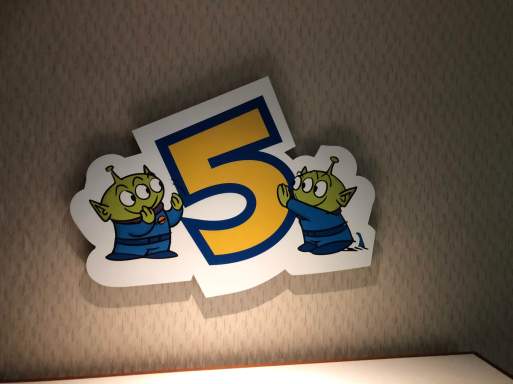 We had a shorter day today as kids were starting to get worn out so we decided on a late lunch at Cheesecake Factory which is located in the downtown Disney area before heading back to the hotel for a rest – well grandma and kids. dan and Sarah headed back for a night session to finish their Disney experience Dan called the Tron best Disney ride at any park he has visited. 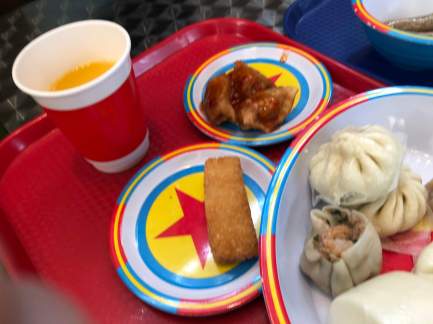 The kids day was complete a very tired Ollie walks into the hotel and who’s there no other than Woody. He suddenly found a second wind to do once last character visit before grandma took them to the hotel convenience store for a scratch up dinner. Next stop Tokyo This park is really amazing and I would recommend to anyone. So well done and very organised. Our car service Sun Transfers got us off to a great start and returned us to the airport with no fuss and worth every penny for peace of mind. Hotel staff we so helpful and we had no language issues. All in all, it was a brilliant experience mostly down to Sarah’s hours and hours of research and a great understanding of all things Disney which means she plans everything to get absolute best out of the park visit. Plenty of hidden gems if you do the research. Next stop Disneyland Tokyo Japan