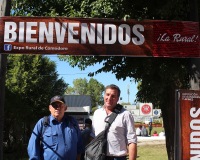 One of the main features of the tour, we headed to the Showgrounds to eagerly see the judging of the

Merino Ram classes, and to browse the goods for sale amongst the stalls at the Comodoro Show.  Not much different to the Nyngan Ag Expo, except for the lack of english speakers, the day was fascinating.

Western Australian Merino Stud breeder Collyn Garnett was the judge, and many had fun placing their preferred rams before the judge announced the winners.

Argentinians are an emotional lot, and it was a common sight throughout the day to see men embrace and kissing each other with great cheers as the announcement of first place for each class was made.

The Merino show classes are somewhat different to that in Australia.  Classes were divided into best fleece, best head, and best whatever else without really judging the whole animal until the Grand Champion.

Some were repeat ribbon winners, others were gracious and congratulated the winners with gusto.  First place ribbons are yellow, second a mixture of blue and yellow.  Speaking to the judge after the day had finished, he did say that conformation was paramount when placing the rams in each class.

Others in the group started browsing through the stalls, trying on the classic Argentinian beret, leather goods, gaucho  slippers (a canvas shoe with woven straw soles), gaucho knives (which are worn with the scabbard stuck into the back of the belt) and horse geargear.

Some walked away with lassos and sheep counters made from rawhide, whilst Frank and Henry sported the Boinas/beret.

Apart from the fact that they were giants amongst the more slightly built Argentinians, and couldn’t speak a word of Spanish, they nearly blended in with the crowd (or so they thought).

Lunch time saw a few of the group wander over to the standard Argentinian BBQ of cordello over coals (lamb), chorizo, corn and empanadas washed down with beer.

So much better than a Dagwood Dog, when you buy a serving of cordello you need to ensure there are about 4 to eat it with you – a ‘single serve’ is actually a whole shoulder dressed with the Argentinian sauce Chimichurri.

Some locals started a latino guitar duel, to which Kerrie, Henry and Col thought they’d join in.  The musicians saw them coming and ensured they couldn’t leave without buying their ‘must have’ CD.
As evening progressed some members of the group returned to the Hotel Austral, whilst others joined the drinks with he Merino breeders and their families.

Struggling to speak Spanish or english, most were able to meet more sheep farmers and learn further about the market and the environment the expansive Estancias operate in. Wool brokers are rare in Argentina, as most wool is sold direct to buyers at the discretion of each Estancia’s management.
Girls head for Buenos Aires tomorrow while men return for another day at show ground for sale and presentation of prizes 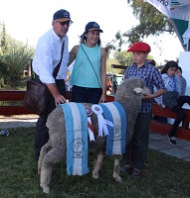