It was with some dread that the group squeezed back into the minibuses on day 14, but not before walking down the main street of Puerto St Julian to clamber aboard a replica of the ‘Victoria’, which was Mendoza’s ship that navigated the Argentinian coastline, including the Magellan Straits.

The fleet of four Spanish ships were the first to circumnavigate the world, and tells a fascinating story of superstition, loyalties and mutiny. Worth exploring below decks, with replicas of Spanish seamen, canons and even a cow for fresh milk.

A short trip down the road took us to Estancia Coronel, which was previously held by the Blake family and where Michael Blake’s father had grown up.

A tour of the grounds and buildings together with a 12 stand woolshed was highlighted by hearing the personal story of Leopoldo entwined with the Blake family.

Leopoldo first became a rookie gaucho under Mr Blake senior as an 18 year old fresh from Buenos Aires on Estancia Cormo near Rio Gallegos.  Leopoldo holds the Blake family with high regard for providing him with the opportunity to work his way up through the gaucho ranks to eventually become a Manager of expansive Estancias.

Michael certainly had a tear in his eye hearing Leopoldo describe Mr Blake senior and the opportunity the Blake family provided to him.

Estancia Coronel was over 700,000 acres with a 40,000 merino ewe base and 1000 rams.  Significantly effected by a volcanic eruption a number of years ago, causing inches of ash to cover the landscape, and a recent dry period of lower annual rainfall, the carrying capacity of the Estancia has declined from 120,000 head to 50,000. The landscape was hilly, including snow covered peaks in winter, and featured seven woolsheds across the Estancia.

Lamb marking was about to begin, and Leopoldo employs extra gauchos to start the 40 days of lamb marking each 7000ha paddock with two teams.  Each team musters their nominated paddock, male lambs are drafted off and trucked direct to abattoirs with the only treatment an ear mark as they walk up the race into the truck. The ewe lambs remain to be docked.

Lambing in the harsh environment has challenges with lamb weaning percentages ranging from 80% down to 14%, pending the season but more recently from the predatory effects of Pumas and competition for feed from guanacos.

On the good side, there is minimal internal parasite issues and definitely no blowfly would be game enough to survive in the harsh conditions. Ewe mouths are checked each year as the abrasive nature of the grasses, and no doubt the fine volcanic ash, does lead to wear and tear on the teeth. Input costs are very low, but 14% lambing percentages would have to be a challenge to overcome.

The soils were consistently chalky grey clay, and inherently fertile (no doubt from the volcanic ash).  The only paddock management was checking water points (wind mills mostly) and the odd fence line.  Solar water systems had been tried in Patagonia, but the short day length for most of the year did restrict the effectiveness of solar.


Existing wells were being converted with submersible pumps, however technology hadn’t really enabled an easy adaption with such narrow bore holes. Mustering was all on horseback via gauchos, and all hombres.  The gaucho world does not embrace women.  With 140 km expanding from one boundary to the other, the horses must have good walking ability and no doubt are as tough and strong as the gauchos who ride them.
Leopoldo showed us a map of the expansive Estancia and politely fielded many questions whilst Michael interpreted.  The discussion was a tad on the serious side until one member of the group inadvertently made an interesting sound leaving everyone in hysterics.  Body language has no barrier between people of different nations.

Back on the crammed bus to what we thought would be a morning tea stop down the road, a few hours later and around 3pm we stopped for a service station feed of empanadas.  Just like the Aussie meat pie, there were lamb or ham/cheese empanadas in a heated cabinet for self serve.

Most of us were weak at the knees from the deferred morning tea becoming the typical Argentinian lunch of mid afternoon.

The final leg of driving across the Patagonian landscape saw us take a quick stop on the shores of the Atlantic to frolic with Sea Lions snoozing on the pebble beach.

Don and Henry had to dip their toes into the Atlantic to claim they had dipped in both the Pacific and the Atlantic whilst on tour. 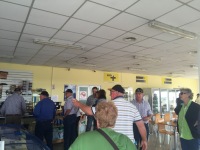 From the sea lions on to Comodora we drove through suburbs, past mountains of rubbish tips, protesters burning rubber tyres and families frolicking on the pebbly beaches.

Such a contrast of third and first worlds as our very patient bus drivers drove to the Austral Hotel in downtown Comodoro.

More on Comodoro thanks to wikipedia