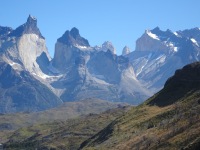 Whilst Ange and Sharpy were having some down time back at the Rio Serrano enjoying the comfy couches and panoramic views, the rest of the crew headed off to the Torres del Paine National Park to explore the magnificent peaks up closer.

Little did we realise that at an average speed of 20km/hour, the half hour bus trip took an hour and a half with a few scenic lookout stops along the way.  Patricio loved being part of the MacWool Farmers Tour group sporting one of the MacWool caps, but it didn’t speed his driving up. 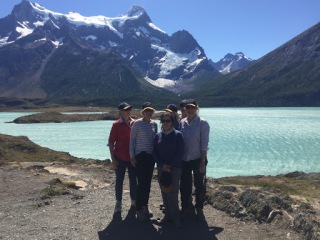 Lunch was by a waterfall, with a few game enough to test their cold tolerance by plunging their hand into the ice cold glacial waters. 40 seconds was the record, but most lasted barely 10. 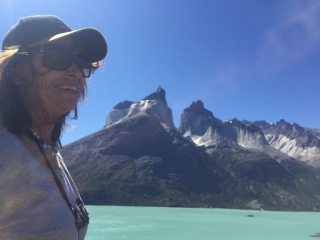 We even managed to squeeze in a viewing of some more sheep as there is an Estancia in the middle of the National Park that we drove through, although they were panting hard in the heat wave conditions of 25 degrees C.

The group finally had their chance to stride out on a hike past another waterfall, a scenic lake and a close up view of the rugged peaks of Torres del Paine.  We struck one of the clearest days of the year, so the views were spectacular.  A few even clambered up to the top of a small peak to yell out a cooeeeeee for all below.

Back on the bus for the looooong sloowww trip back to the Rio Serrano, we stopped by a cafe for a few roadies to cool down. 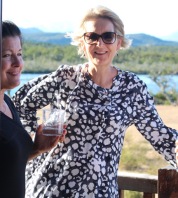 Ange and Sharpy were there to greet us on our return, and the evening drinks turned into a fun night of eating and drinking Chilean beers and wines.

Our wine loving host, Ivan, suggested to us that the Chilean way of palate cleansing after your meal was to down a glass of Fernet (pronounced with a rolled ‘r’ as Ferrrrrrrr-nay).  Well, 30 glasses were lined up at the bar courtesy of Chris Martin, and we were all expected to down the mysterious Chilean liqueur.  It tasted like cough syrup.

Most couldn’t get to the bar fast enough to wash their mouths out with a cool refreshing Patagonian beer (the preferred Aussie palate cleanser).  The rest gagged.  Only Ivan gleefully downed glass after glass of the pungent brew, praising the wonders of Chilean wines and liqueurs.

The one common effect was that all were going to be very slow the next morning.

More photos will be added here after we leave cruise. 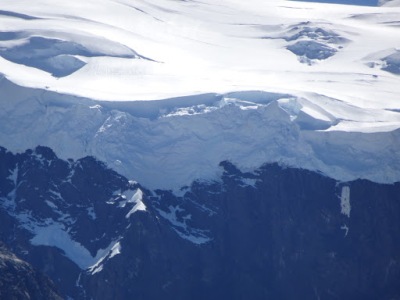