These pegs where pegged to various of the tour group members followed by much giggling and snickering among the others until the pegee found the peg and then homed in on the next victim. 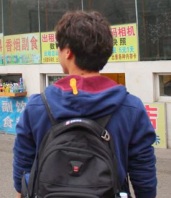 At one staff group from Yass who will remain also remain nameless ended up with no less that 5 pegs on backpack, someone decided to add their hanky to the peg as if drying washing. 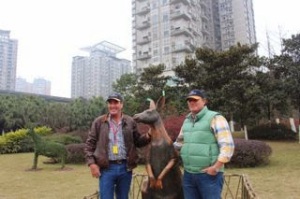 Oh yes a couple rogues in the group peg the statue of a kangaroo in the panda park.  It was funny to see how such a silly little game could cause so much laughter and so many alliances formed, you keep eye on my back and I will watch yours, etc 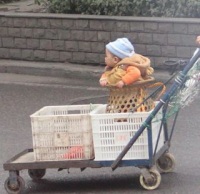 The panda’s were very sleepy but we did get to see one up close
enjoying a bamboo lunch. After the enjoyable visit with china’s national treasures we headed off to lunch of our own in the old town and our first real experience of street seething with people.

It was unbelievable but everyone was so nice and I really felt very safe prowling around the streets.

After a meal at a great place that of looked the old town street were headed our to sample their wares, everyone seem to come back to the meeting point with a purchase or two.

Back on the bus to navigated (at one point our national guide, David was off the bus folding in drivers mirrors so the could pass the bus in narrow gridlock little road) our way to teahouse and learn how to make and drink traditional Chinese tea.
Once at the teahouse drop off point the two MacWool staff decided they need to have a meeting on the bus while the rest of us visited the teahouse ZZZZZzzzzzzzz.

The park was very beautiful and the tea was tea but worth doing just the same.  After another dinner you guessed it Chinese but it was again tasty but a few dishes that seem to make repeat performance such as the scrambled egg and tomato, very yummy but not three times a day.

Following dinner it was back on the bus for a 10-minute ride to the dock to board the Victoria Lianna, our home for the next three days.
Thanks goodness we walked down the 200 hundred steps to board and not up otherwise I would be still in Chongqing.