Well we made it. It was a longish day driving but not too back. Our hotel was nice (even nicer as it was free night Thanks La Quinta returns program).  There was a Cracker Barrel near by so we walked over for a steak and salad before turning in. 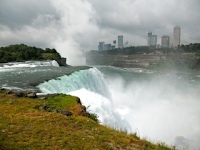 After another hearty bright-side breakfast of waffles and cereal we set out to Niagara Falls. It was warm but not as warm as it had been lately. With lots of inexpensive parking at the falls we were soon out of the car and heading to the American Falls. One word ‘Spectacular’.  This is certainly the highlight of the trip for both of us. Although not a Natural Wonder of the World it should be in my book.

We walked for a couple of hours and around the American Falls before having lunch at the Hard Rock cafe.

After lunch we decided to walk around to the horseshoe falls via goat island. It was a long walk but there were a lot of great viewing places along the way.

The whole area is so well set up and organised to cater for the large numbers of visitors. Even though it is summer break there was no overcrowding and everyone had a good view at all the vantage points.

Day two we headed back to the falls and boarded the first Maid of the Mist tour of the day to view the falls from the river, this was really worth every cent of the $13 per head. I would have paid 3 or 4 times this for the 30 minute ride to right beneath the Horseshoe Falls.

Falls Facts:
The Niagara Falls are the most powerful waterfalls in North America. These voluminous waterfalls are situated on the Niagara River, which drains Lake Erie into Lake Ontario and forms the international border between the Canadian province of Ontario and theU.S. state of New York. The falls are 17 miles (27 km) north-northwest of Buffalo, New York and 75 miles (121 km) south-southeast of Toronto, between the twin cities of Niagara Falls, Ontario, and Niagara Falls, New York.

Over the Falls:
In October 1829, Sam Patch, who called himself “the Yankee Leapster”, jumped from a high tower into the gorge below the falls and survived; this began a long tradition of daredevils trying to go over the falls. On October 24, 1901, 63-year-old Michigan school teacher Annie Edson Taylor was the first person to go over the falls in a barrel as a publicity stunt; she survived, bleeding, but virtually unharmed. Soon after exiting the barrel, she said, “No one ought ever do that again.” 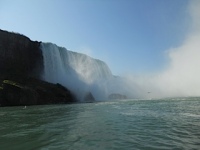 Wikipedia has detailed information of all the attempts plus and more interesting falls facts.

In the “Miracle at Niagara”, Roger Woodward, a seven-year-old American boy, was swept over the Horseshoe Falls protected only by a life vest on July 9, 1960, as two tourists pulled his 17-year-old sister Deanne from the river only 20 feet (6 m) from the lip of the Horseshoe Falls at Goat Island. Minutes later, Woodward was plucked from the roiling plunge pool beneath the Horseshoe Falls after grabbing a life ring thrown to him by the crew of the Maid of the Mist boat.

I recommend this amazing place be added to everyone’s bucket list. 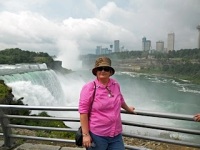 After the Maid in the Mist ride we set off for Columbus Ohio where we will stay for three nights (Four star $60 night thanks Hotwire.com). We plan to attend the Ohio State Fair the next couple of days before heading back to Kentucky.